How much should your young athlete sleep? 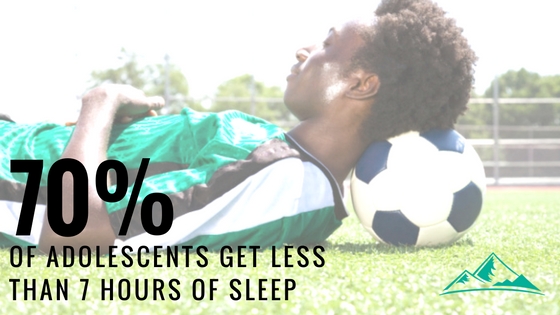 We often plan to get a good night of rest before an interview, presentation or big test. Sleep calms our brain under stressful situations and restores nutrients to prevent mental fatigue.

Excellence in sports performance goes beyond just athleticism. The best athletes also have to be mentally focused for practices and games, day after day. Getting an appropriate amount of sleep is one of the most important requirements for optimal mental arousal during high-stress plays.

Yet many athletes (of all ages) have a hard time finding time for sleep with busy home, school and social schedules. The Centers for Disease Control and Prevention found that almost 70 percent of adolescents get fewer than seven hours of sleep, and fewer than 8 percent get the optimal nine or more hours of sleep.

Intense physical activities place increased energy demands on the brain and deplete nutrients, causing central fatigue. This preexisting sleep deprivation, in addition to the mental demands of sports, can have a detrimental effect on performance and even increase injury risk.

Getting enough sleep allows the brain to quickly sort out thoughts and to plan movements in an organized manner.

Members of the Stanford University swim team increased their sleep to 10 hours per day and realized faster times off the blocks, for 15-meter sprints, and for turns and increased kick strokes.

So how much sleep should athletes get? The National Sleep Foundation recommends adults get seven to nine hours of sleep, with athletes benefiting from even higher numbers to improve performance, optimize recovery, and reduce illness and injury rates. Healthy sleep habits can lead to peak performance in all sports.