Another school year is upon us, which means another scholastic athletic season is, too.

How do you know whether you are ready to endure the rigors of two-a-days or preseason conditioning? Aside from a thorough physical examination by your local doctor, there are other ways to capture your neuromuscular ability.

One of the most important ways is the Functional Movement Screen (FMS), which includes seven body weight movements to analyze body mechanics and possible neuromuscular asymmetries (imbalances caused by a faulty nervous system or muscular function).

The screen takes 15 minutes to complete. Athletes who score 14 or fewer points (out of 21 possible) are 11 times more likely to be injured during an athletic event. This is valuable information for both the coaching staff and the medical team overseeing the health of the athletes to keep them strong and on the field.

This tests the athlete’s ability to squat with hips and shoulders in line. It tests upper- and lower-body during a squat, which is a common position during athletics.

This assesses stepping functions and can identify asymmetries in mobility and stability. It requires stability of the core, pelvis, upper body and stance leg while moving the opposite side. This is a common action when running is involved.

This assesses the ability to maintain upper-body stability while lowering into a split stance position, which is a necessary movement in stop-and-go and stop-and-change-direction sports.

This demonstrates the natural rhythm of the shoulder blade and the shoulder joint during upper-extremity and overhead activities, such as baseball, volleyball and swimming.

This test looks at lower-extremity flexibility and core stability during lower extremity movements.

This assesses the ability to stabilize the spine during a pushing movement. It offers a great look at core stabilization during contact sports.

This pattern looks at core stabilization during upper- and lower-extremity movements. All sports require a changing of position while remaining strong through the core. This gives a snapshot into an athlete’s ability to do so. 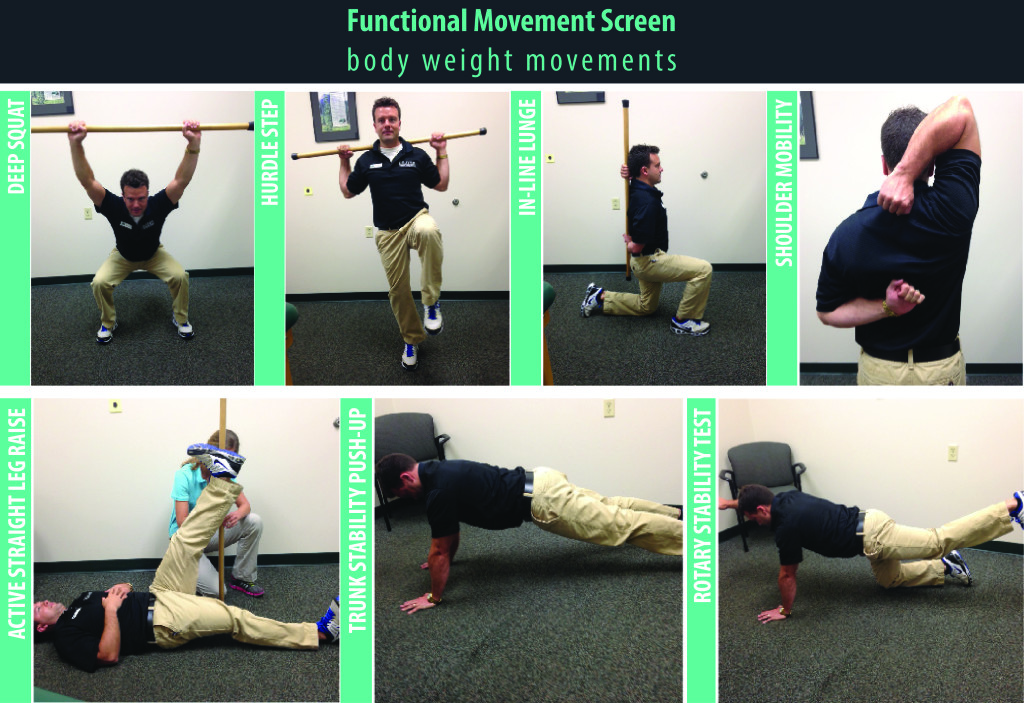